A Brief History of Lashenden (Headcorn)

The airfield was in operation not once, but three times in its illustrious lifetime.

Back in 1911 Shenley Farm (the land on which Lashenden Headcorn operates from) was acquired by a family who had recently returned from Canada. They increased the size of the fields having been inspired by the vast expanse of the Canadian prairies, which didn’t go down too well with the locals. However in 1914 a member of the Royal Flying Corps was sent from the ministry to find a sight for a possible First World War training school, Shenley Farm turned out to be the perfect place and was used throughout the duration of the Great War.

After the war the newly formed R.A.F handed the airfield back which was reverted once again to a working farm. The farm was then sold on to a family friend in about 1919, who bought it out of a gratuity from his service during the Great War.

So for the second time as an airfield the history continues…

Shenley Farm was then bought at an auction held at The Royal Star Hotel in Maidstone by my great, great grandfather, Edward J. Freeman in 1927. He was asked to start the bidding by an army friend who was forced to sell due to The Depression. Edward’s opening bid of £6,000 – a fair starting price, he thought – was the only bid! It is understood that Edward’s youngest son, Mark, was a pilot so having looked at the farm again put it into use flying a First World War bomber, a BE2 bi-wing.

In 1942 the Airfields Board requisitioned Shenley Farm and used rubble from the blitz to fill in ponds that form part of the runway we use today. Tracking and coconut matting were put down to form an all-weather structure that was held down by steel spikes. The RAF named the aerodrome Lashenden, which was an attempt to confuse the enemy, Lashenden is to the southwest of the field! On the 6th August 1943, 127 Wing Royal Canadian Air Force moved in comprising of 403 and 421 Squadrons equipped with Spitfire 1Xb’s under the command of ‘Johnnie’ Johnson. The airfield was then passed over to the United States 9th Air Force and upgraded by the construction organisation. On 13th April 1944 the airfield was taken over by the 100th Fighter Wing, 19th Tactical Air Command, 9th Air Force using Shenley House as its headquarters. On 17th April, 354th (Pioneer Mustang) Fighter Group comprising 353rd, 355th and 356th Fighter Squadrons arrived operating the North American P51D Mustang. There were 3000 ground crew supporting 70 aircraft and one sortie would use over 3,500 US gallons of Avgas. The 354th Fighter Group left Lashenden on the 22nd of June 1945 and the airfield closed. 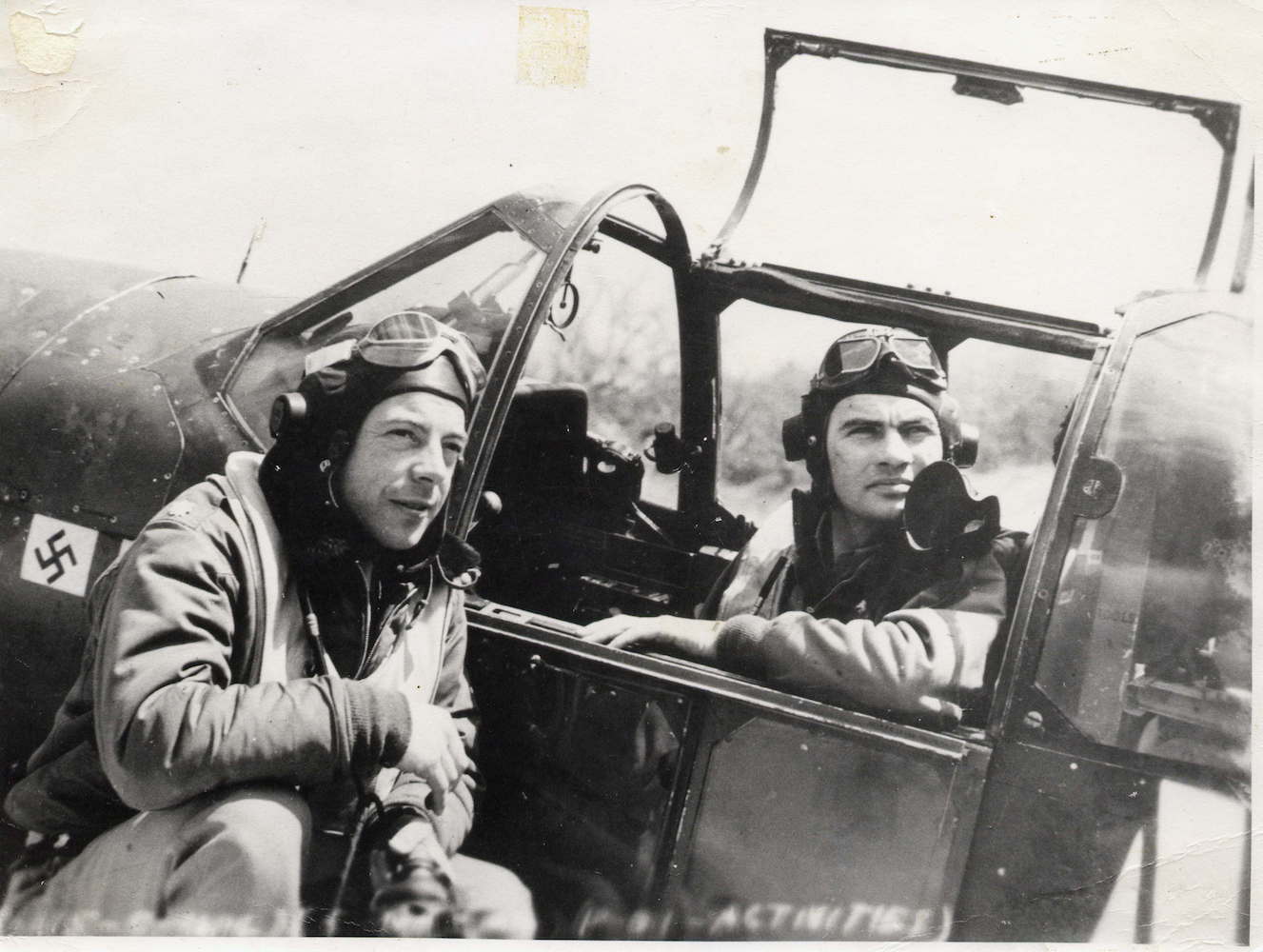 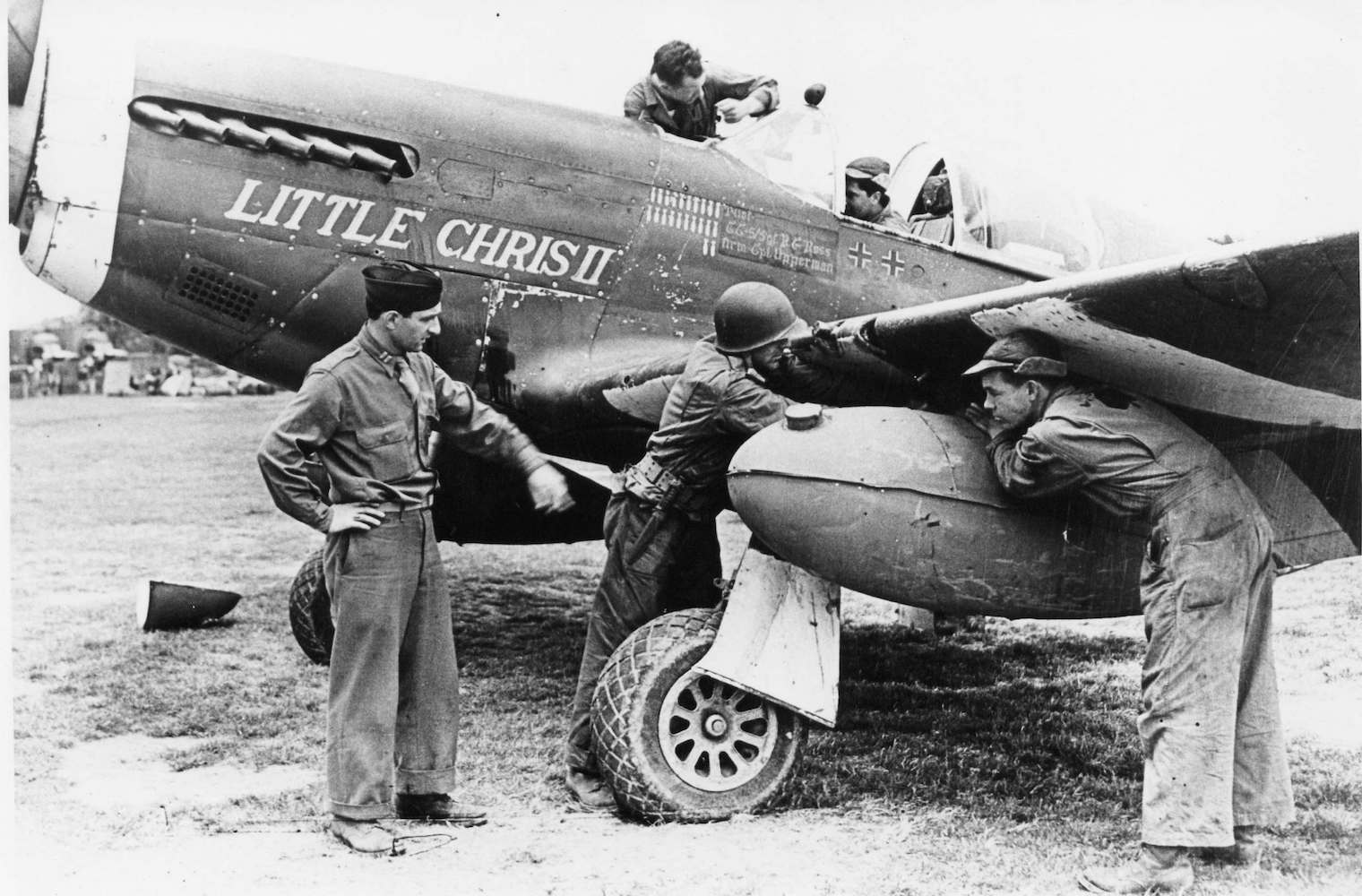 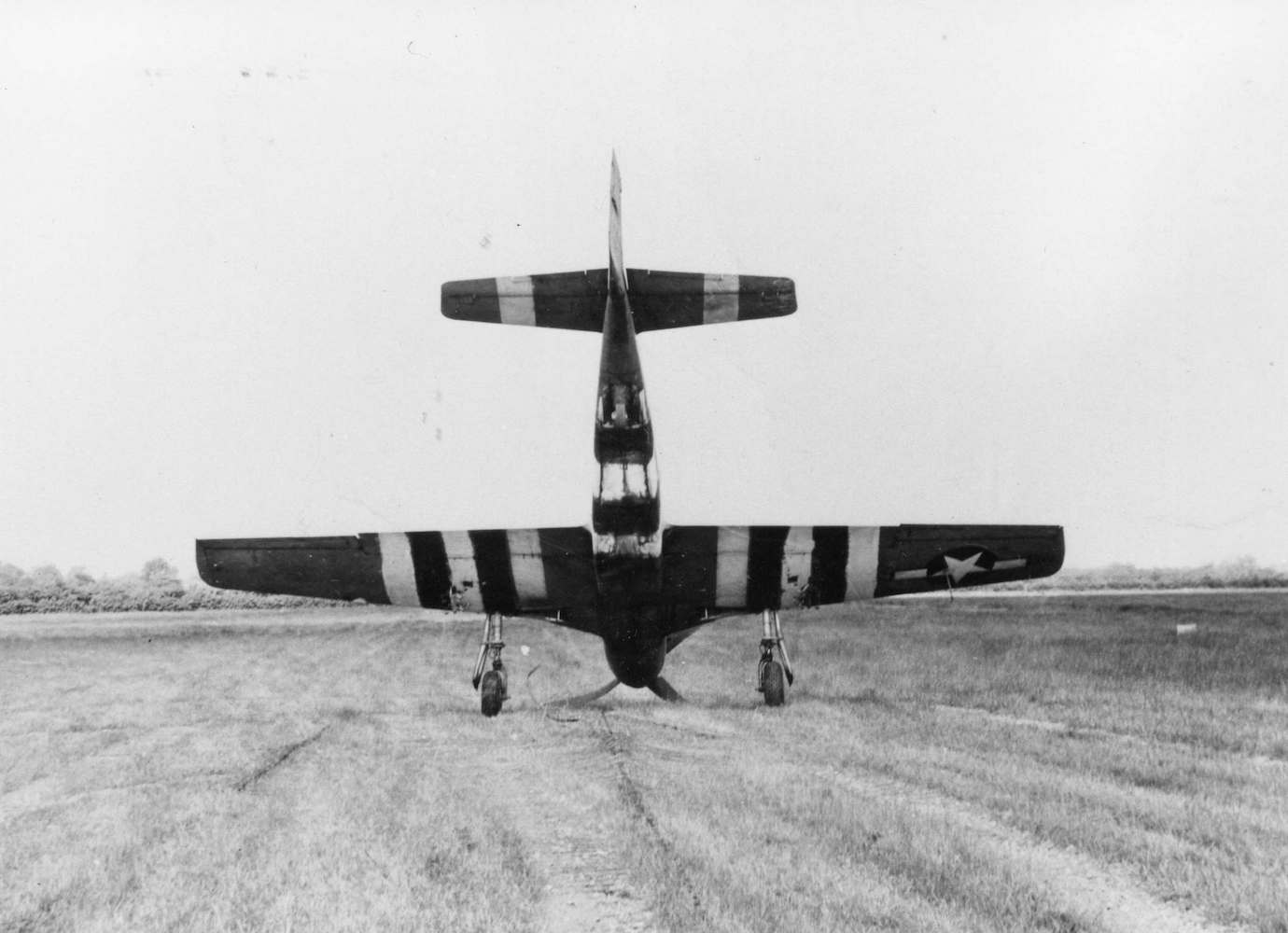 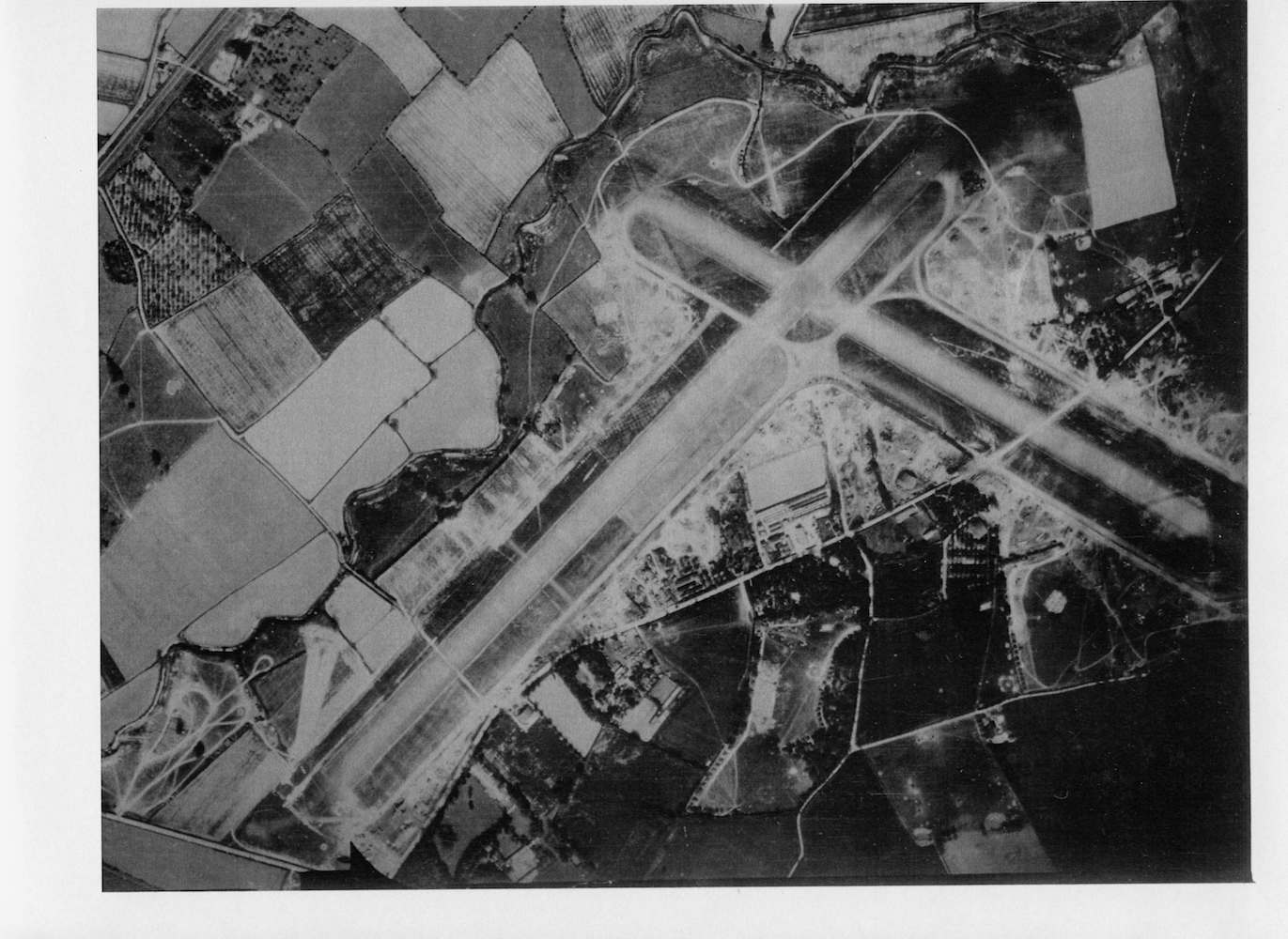 And for the third time the airfield is reborn…

After the war the aerodrome was handed back to our family and at the end of the 1950’s my late father, Chris, met my mother Diana who was flying and working in Canada. Her arrival at Shenley Farm prompted flying to start up again and in 1963 Diana bought a second-hand wartime hangar from Newport Pagnall that my father built with the help of the two Alf’s, Arthur Saunders, Jack Woolford and Nelly the crane! The other blister hangar was completed between 1965-7 and was dual-purpose with pigs, then sheep, living in the eastern end. In 1969 the British Aerobatic Team spent the Spring Bank Holiday here resulting in the 1977 Public Enquiry and 22 enforcement notices – thankfully all of which were quashed. In 1969 there was also fire in the large blister hangar on the eastern side which resulted in the loss of nearly 1000 pigs; only one escaped and was found down by the river wallowing.

Diana did a lot of her flying in Austers, one of which (G-AJGJ) Chris modified with a long-range belly tank extending the range to 5 hrs! This minor mod was approved by the A.R.B. and is still in use today. G-AJEI was bought as a birthday present by my mother, which was rebuilt by Chris with the help of another engineer and my mother in the Nissan hut.

There was a good liaison with Rochester and in the 60’s Diana, as social secretary, organised several events with a number of aircraft visiting, including famous pilots such as James Black, Neil Williams, Neville Browning and Roy Legg as well as some pilots from the Red Arrows. Another well known aviatrix, Sheila Scott was a good family friend and I remember her arriving in appalling weather and having to stay the night with us.

Parachuting began in the 1960’s with Lashenden Sport Parachute Club and the Met Police Parachute Club that ran until 1979. Headcorn Parachute Club was started by the present owner, David Parker, using first a Cessna 206, then a Cherokee 6, the Islanders, the Let 410 and the Cessna Caravan. The Lashenden Air Warfare Museum was started in 1970 by Jack Matthews and 1972 saw the arrival of Headcorn Flying School with Mike McRoberts and Colin Dyne, that resulted in a fleet of Robin aircraft for which we were the agents. At about that time the 500 Air Training Corps started up and in 1976 Farmair became busy chasing the Colorado beetles around Kent with seven Pawnee PA25 crop spraying aircraft that were based here (the winters were spent spraying cotton in the Sudan and Libya). The engineering by that time had become the heart of the place – Ted Dann was in charge and with Keith Butler and John Morris they kept the Pawnees going.

Privately owned aircraft also made up a good proportion of those based here. In 1987 Mike moved to Rochester and London Flight Centre Headcorn Ltd was formed run by Nigel Harris with Cessna and Piper aircraft. In 1995 Nigel left and today we have Weald Air Services Ltd supplying aircraft to our enthusiastic instructors! In 1992 the aerodrome had to fight a second public enquiry with 14 enforcement notices including one on a change of use on the drop zone, which was proved in our favour as we still graze sheep there (much to the concern of some of the jumpers!), without the sheep we would have lost!

James Tuke obtained his PPL(H) in 1987 and started Thurston Helicopters Ltd in 1989 with G-JWFT. The blister hangar also collapsed under the weight of snow in 1987 and to add insult to injury the hurricane in October damaged the new hangar that was being erected to replace it. Robinsons had to replace all of the ‘Z’ purling and use a turfer to pull the building back into alignment. The Tiger Club moved to Headcorn in 1990 from Redhill and left us in 2015 for Pent Farm before relocating permanently to Damyns Hall in Essex. The Sheep shed was built in 1990 and the “Toy Shed” (now mostly occupied by Hi Flight) was built in 1993 following a barn fire in 1992.

My father left us for the A.T.C. in the sky in January 1999. We held a memorial service for him and afterwards I went up in G-ATWJ with Terry Hodges to scatter his ashes down the runway. His passing was the end of an era and I had always had the feeling that he was invincible – he was always there on the end of the phone and radio helping pilots and giving advice to other aviators whether they needed or wanted it! I know that he saved a great number of airfields using the knowledge he had gained from the two public enquires. I had a year of fire-fighting before I felt comfortable in his chair.

Skybus Balloons run by Tony Hill and Shiralee Colin moved into the guard hut in 2000 and shortly afterwards they took over running the Wings restaurant. Then in 2001 a new club, Windbags, started despite Ben Williams having problems getting off the ground due to the foot and mouth outbreak. Also in 2001 Hi-flight Aerospace moved in run by Simon Marsh specialising in aircraft refurbishment and aircraft re-sprays. Most of our old tractors and balers were bought from his father, Kerry, so I knew the family traits!

In 2010, with a serious attempt to go greener, the new loos were built. With 4 roof mounted solar vacuum collectors and underfloor heating 600 litres of water are heated each day from February to October.

In 2011 the new Aircraft hangar was erected with Hydroswing hydraulic doors, this is a dual purpose building to support both Aviation and Farm storage. In 2012 a 50KW PV solar system was put in place on the roof for the future electric powered aircraft!

In 2014 Aerolegends arrived and have introduced many different flight experiences such as Spitfire and De Havilland Dove flights. The business has grown rapidly and a wartime scramble hut was aquired from an RAF Bridgnorth base to complete the wartime experience. Recently a C47 Dakota was added to the fleet; so far several round parachute drops have been a great success.

Flight Sport Aviation have also been here for a few years with their C42 aircraft, providing other opportunities for people learning to fly in smaller aircraft.

We are now in need of more hangarage space so have bought a second hand portaframe which is currently being constructed.

Thank you to everyone who supports Headcorn, I am very optimistic about the future of this unique aerodrome.